Are Your Selfies Making You Age Faster? 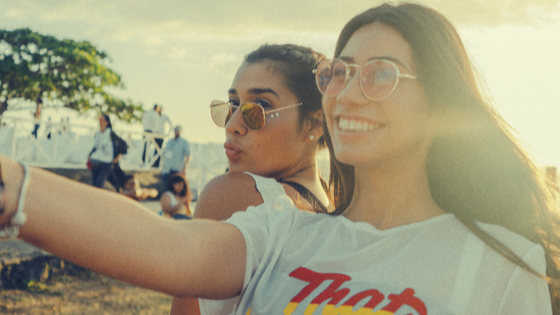 Worried about looking older than you are? Stop making these faces.

Whether you are willing to accept it or not, you are going to age. Fine lines, wrinkles, age spots, sagging...it's all a part of life. But despite its inevitability, there's no need for you to hit the fast forward button on these signs of aging. However, you may be doing just that every time you pucker up, squint, or otherwise contort your face into your go-to selfie pose. Below are the biggest aging culprits when it comes to our selfie habits.

The Duck Face
The duck face was once heralded as the ultimate expression in every girl's selfie repertoire, however, it's popularity has begun to wane. This is partly due to the fact that literally no one other than Kim Kardashian West can actually pull it off perfectly, but also because of the unattractive "smoker's lines" it has been known to cause.

And if you think the term "smoker's lines" is unpleasant, the actual lines themselves are even worse. Smoker's lines, aka vertical lip lines, form around the mouth and got their name due to their common appearance on patients who frequently smoked for an extended period of time. The constant puckering of the lips leads to deeply etched lines that extend out from the lips, and once they exist only extensive laser resurfacing and fillers can truly reduce their appearance. Your best course of action is to ditch the duck lips and simply relax your mouth area in your selfies.

Frowning is one of the worst expressions you can use thanks to the deeply etched lines it creates in the texture of your skin. Throw in a raised brow and repeat the exercise daily, and you might end up looking permanently perplexed and irritated. A frown causes the most common of wrinkles - the glabella lines - and a raised brow leaves horizontal lines across your forehead. And while you may not consider them to be an issue in your youth because they disappear the moment you stop making the face, they will eventually stick around even when your face is in repose. Lines across your glabella can create an angry expression even when you aren't feeling that emotion, so do your best to steer clear of that face and get a little botox in the area to ensure you aren't doing it subconsciously.

The Bunny Nose
It might look adorable and flirty, but having dozens of tiny and finely etched lines across each side of your nose when you're only in your late thirties or forties isn't adorable.  The bunny nose pose is when you scrunch up the muscles on each side of your nose while smiling and laughing, and the reason it is so popular is due to the genuine-looking expression of happiness and joy it can portray. But that skin is sensitive, thin, and prone to aging quickly if you aren't careful. Not to mention the contortion that takes place in the rest of your eye area when your nose is scrunched up, and the skin surrounding your eyes is the thinnest skin on your body. The problem with the bunny nose is that many of us don't even realize we're doing it when we're not deliberately posing that way for a selfie, so making this face on purpose only adds to the lines it will eventually cause. As with the previously mentioned frowning and eyebrow raises, botox is one way to ensure this area of your face sits still no matter what expression you make, while still preserving your naturally radiant smile.

Blue Light
Ok, is this a facial expression? No, of course not. Although it's just as damaging to your youthful complexion as mimicking the blue steel face from Zoolander when your skin is exposed to too much of it. The blue light emitted by mobile phones is causing a rapid increase in photoaging, and reducing the skin's ability to moisturize itself from the inside. If you don't believe us, navigate to the settings app on your phone and you're likely to see an option to increase the warm light on your screen. The studies are so compelling that even cell phone manufacturers took notice and provided options to reduce blue light. And yes, that orange hue on your phone may be difficult to adjust to at first, but since most of us spend an average of 3+ hours a day with our phones inches from our face, it's time to reduce the blue light on your phone and spare your DNA the damaging effects of blue light. However, we do need to point out that SOME blue light is not always a bad thing, but only when it is delivered in a controlled and limited way. Patients suffering from acne have experienced tremendous benefit from blue light treatment during doctor's visits thanks to it's ability to reduce oil production and kill acne-causing bacteria. But keep in mind that a blue light treatment for acne is a once in a while occurrence that is intended to last no more than 15 minutes at a time, not for an extended number of hours every day. That is when blue light crosses the line from beneficial into damaging.

We know selfies are a fun way to express yourself, but make sure your expressions don't permanently etch themselves in your skin and following our tips will help prevent unnecessary premature aging.